A Decade of Neglect

“A Decade of Neglect: Public Education Funding in the Aftermath of the Great Recession,” details the devastating impact on schools, classrooms and students when states choose to pursue an austerity agenda in the false belief that tax cuts will pay for themselves. 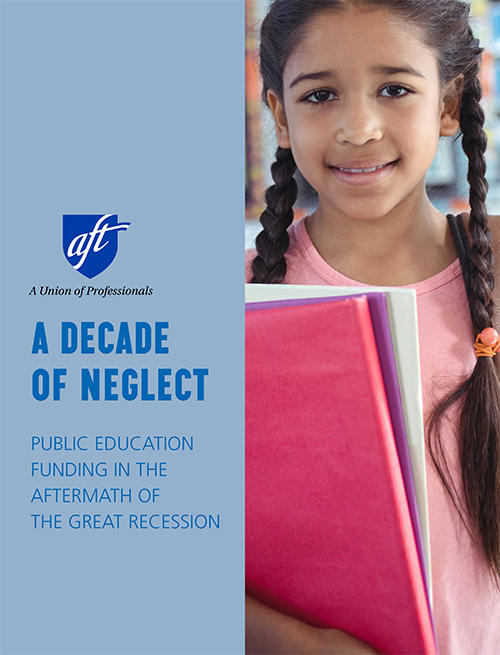 The comprehensive report offers a deep dive into the long-term austerity agendas and historic disinvestment that sparked the wave of nationwide walkouts this spring.

Among the findings: K-12 education is drastically underfunded in every single state in the United States. When you control for inflation, there are 25 states that spent less on K-12 education in 2016 than they did prior to the recession. But there are signs of the negative impact of austerity even in states with relatively stronger investment in schools.

While the recession may have forced budget cuts on our schools, the report exposes how Republican legislators and governors prolonged the damage by cutting taxes for the rich at the expense of public schools.

A majority of Americans instead support repealing tax cuts for the rich and using that money to invest in education, infrastructure and healthcare.

The problem only gets worse in higher education, where 41 states spent less per student, creating a massive affordability and accessibility gap. This explains why tuition and fees for a two-year degree in 2017 rose at three times the rate of inflation when compared with 2008, and why the cost of a four-year degree rose even higher, putting college woefully out of reach for far too many Americans.

The report was accompanied by a key resolution, passed by delegates at the AFT’s biennial convention in July 2018, to turn the data into action.